Anthropogenic Effects on Grouse Detection and Abundance Based Upon Road & Trail Characteristics in Wester Montana.
​Abstract:
Anthropogenic structures such as roads and trails, and human use may affect space use, demography, density/abundance, and other wildlife population parameters. Human infrastructure and activity may result in biased population estimates by influencing the abundance/density of a species within a localized area near infrastructure or the ability of biologists to detect individuals during standard population surveys. To evaluate the effects of anthropogenic structures on mountain grouse populations, we developed and conducted replicated surveys throughout western Montana during 2020. Biologists and volunteers collected count data for dusky, ruffed, and spruce grouse during 582 point count surveys along 291 survey transects located throughout Montana Fish, Wildlife, and Parks Regions 1-5. Survey transects occurred along two types of human infrastructure: U.S. Forest Service roads with minimal traffic during the survey period and U.S. Forest Service trails.  As a first step, we compared count data for road and trail transect surveys for each species of grouse. Overall, raw counts of dusky grouse were higher for transects located along trails (0.59 ± 1.07SD grouse per transect) than roads (0.33 ± 0.91SD). Raw counts of ruffed grouse were similar for transects located along trails (0.75 ± 1.42SD) and roads (0.69 ± 1.55SD). We did not have a sufficient sample size to evaluate spruce grouse counts.
Watch Presentation
Evaluating the Effects of Electric Cables on Urban Howler Monkeys with Local Knowledge and Naturalistic Observation
Abstract:
Black-and-gold howler monkeys commonly inhabit urbanized areas of South America often using anthropogenic structures, such as electric cables, to travel across urban environments, which can result in increased rates of mortality. The urban black-and-gold howler monkey troops in Pilar, Paraguay, offer a unique opportunity to understand the dynamic between humans, wildlife, and complex urban habitats. With very little research existing on the black-and-gold howler monkey populations in Paraguay, this study aims to provide a baseline and initial understanding of the relationship between urban howler monkeys and human populations through an interdisciplinary research approach. During summer 2021, we studied the two most-at-risk monkey troops in Pilar to evaluate whether proximity to electric cables is influencing monkey behavior. We grouped proximity to electric cables into 3 groups, < 5 ft, 5-15 fit, and > 15 ft, and we grouped behavior into 7 classes: resting, feeding, traveling, playing, mating, grooming, and other. We found evidence that the behavior of the monkey troops had a significant behavior difference across three levels of proximity to electric cables (χ2= 225.8, df = 12, P < 0.001). Traveling was the most frequent behavior when within 5 feet of an electric cable, whereas resting was the most frequent behavior when greater than 5 ft from an electric cable. Next, we will fit a multinomial model to further assess the effect of electric cable proximity on monkey behavior. We explored the human dimension aspect of the monkey-cable issue by interviewing 104 community members. Within the community, the view of the monkeys ranged from being concerned to viewing the urban monkey populations as pests. In the future, the results of this study will provide valuable sociological and ecological tools to further assess the nuances and complexities of social-ecological issues in Paraguay.
Watch Presentation 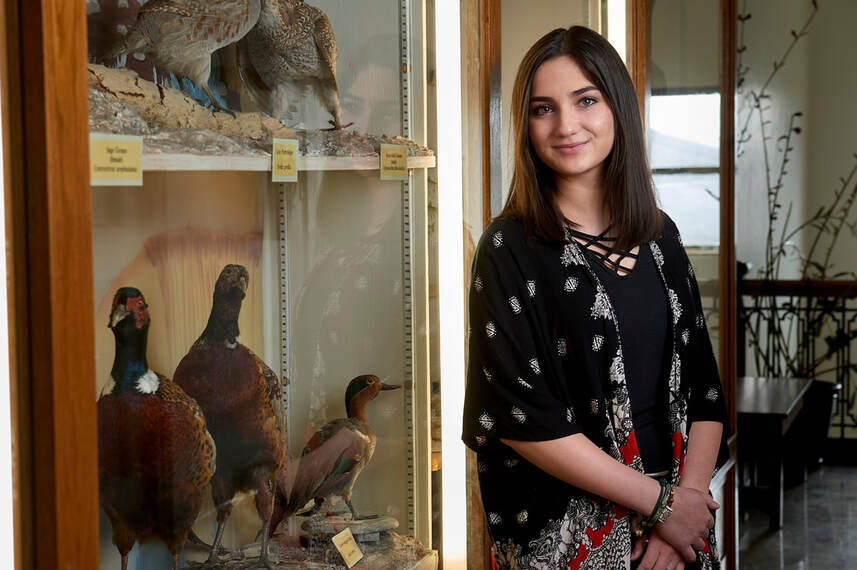 "BOZEMAN — Olivia Jakabosky was a toddler when her family moved to the foothills of the Sierra Nevada mountains in northern California, where she saw firsthand the problems that arise when humans and wildlife exist in the same space. Now, she is being rewarded for her drive to craft solutions to issues stemming from these interactions and empower others to launch similar endeavors.

Jakabosky, a double major in conservation biology and ecology in the Department of Ecology in the College of Letters and Science and Cameron Presidential Scholar in the Honors College at Montana State University, has been awarded the Udall Undergraduate Scholarship for her efforts. The scholarship is given to sophomores and juniors with exceptional commitment to issues related to Native American nations or the environment. Students are nominated by their institutions...

Though only at the end of her sophomore year, Jakabosky has worked on research projects with department head Diane Debinski and associate professor Wyatt Cross in Ecology. In the fall, she reached out to Lance McNew, an associate professor in the Department of Animal and Range Sciences in the College of Agriculture, and is now studying how trails and roads affect the dusky grouse population through his Wildlife Habitat Ecology Lab."
Read More